This is a picture perfect run with the famous abbey on the rock right behind the runners. Surprisingly there weren't any official photographers at the start and I haven't seen anyone along the route.

The crowd was huge, over 400 runners plus several dozen children, and very strong. Look at full results here and the full technical description of the race here. I came 306th overall and should have been 64th in my age category, Veteran 2, but for some reason the official results show me in a much younger category of Senior at 84th place.

The view at the start was spectacular with le Mont showing itself off in glorious sunshine, just as forecasted, even though the whole week had been cold and rainy. The 10K race started about a mile from the gates of the fortified abbey and trailed in a mostly level straight line along the river all the way to the Pontorson stadium. There was an unexpected steep but short rise at the end and a short streak through town, some of it over cobbled parts of the main street.

As with the St-Hilaire-Mortain race, the compacted gravel surface lessened the grip a bit and slowed down the race, I think.

I developed a cold midweek and thought of dropping out but in the end, as I had normal temperature and no cough, I decided to stick with it and never regretted. Starting slowly I ran negative splits, increasing the pace through the run, and after the finish felt completely cured. As one veteran runner advises, 'don't run if it's below the neck, if it's above the neck, do.'

In this photo by Francesca Bostock, my running buddy, I'm passing the 9km mark. 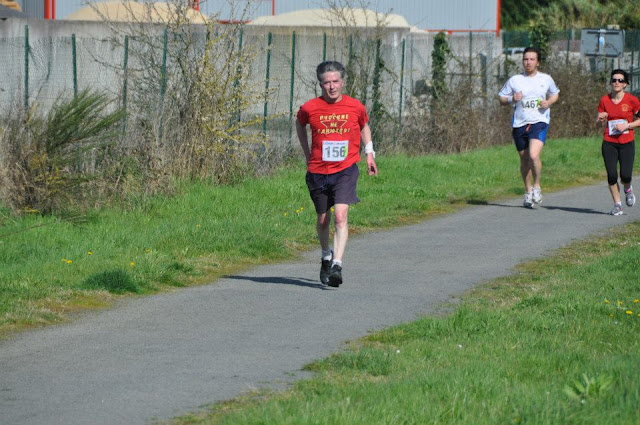 Email ThisBlogThis!Share to TwitterShare to FacebookShare to Pinterest
Labels: common cold and running, how to get rid of a cold, Mont St Michel, perfect runs, running in Spring