A Perfect Run: St-Hilaire to Mortain in Normandy.

It was a proper race organised by the Normandy athletic federation, the athletic clubs of St-Hilaire-de-Harcourt and Mortain, two medieval towns covered in glory during the battle of Normandy in 1944.

The full 15.75 km run started at the mairie in St-Hilaire and finished at Mortain stade on top of the mountain where Mortain is perched on. After a streak through St-Hilaire, the run went onto a chemin vert - a green lane, the gravel-paved leisure path laid over the old railway line where no motor vehicles are allowed. One disadvantage is that gravel never lets you have a good grip but the big plus is that, as a former railroad, it has long gentle rises and equally long gentle down-hill stretches, which allows you to go at full throttle or to enjoy running at your own pace. I did the latter, keeping company with Francesca, who was running a duo — a relay run, with the course split into two segments roughly 7.5 km each for two runners competing as a team.

At the end of the course there is a horrible catch: just before entering Mortain you go off the chemin vert onto the main road where marshals flag the cars to go slow. But Mortain sits on a high mountain towering over the vast valley leading up onto the Mortain hill. And you have — right at the end of a gruelling course — to struggle all the way up that road. The French were out in force shouting Courage! and Allez-allez! as we huffed and puffed our way up, slowing down to hardly faster than a walk.

What makes it worthwhile, apart from the exhilarating feeling of accomplishment, is the spectacular view over the valley and the majestic plane-tree alley just as you enter the town on the serpentine road from St.-Hilaire.

I was very impressed with the logistics and organisation. The mayor of St-Hilaire came to wave off the runners at the start, and the mayor of Mortain came to see the finish. We had free box-fulls of safety pins today for dossards (race numbers) and electronic chips to mark the time, and lots and lots of marshals. And on the road up the mountain the only car that sped past me irritatedly was an English-reg Range Rover, French drivers were all patient and dead slow. And a great fete atmosphere at the end. The crowds were huge.

And here's a photo by Francesca from last year's race. 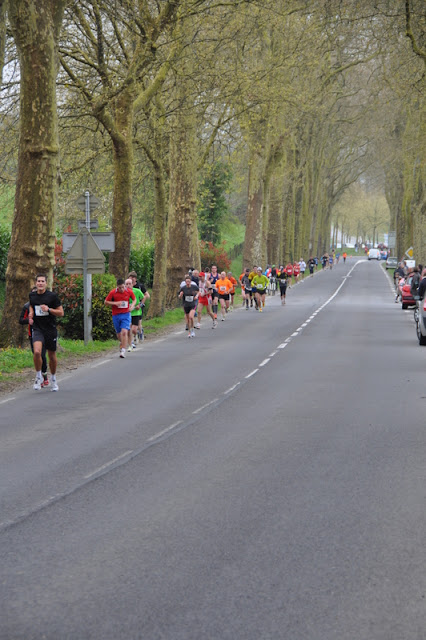 Email ThisBlogThis!Share to TwitterShare to FacebookShare to Pinterest
Labels: Mortain, running in Normandy, running on the road, St-Hilaire

Checks said...
This comment has been removed by the author.
6:43 PM

It was great to have the company Alex, thank you. I hope I didn't slow you down too much. The duo, for anyone interested in maybe doing it next year, was 7.2km for the first runner and 8.55km (including the mountain! ) for the second. We shared a tag/ankle bracelet style timer chip, which had to be passed from one to the other at the handover point. There were podium places and prizes for the first 3 male duo team but only the winning (first place only) female team and mixed sex team won podium places.
There was also a raffle, using dossard numbers, where the prizes varied from running shoes to a microwave oven to a tablet.
I still marvel at the fact that all these elite (and not so elite) athletes are fed and watered after the race with greasy sausage sandwiches, chips and beer!
What a way to spend a sunny, but cold, Spring Sunday morning.

Forgot to add: registration fee was 10 euros. But! I won a goodie bag with a packet of coffee, a bottle of farmers' apple juice, two packs of sablée biscuits, a jar of strawberry jam and a jar of terrine artisanale (pate). Maybe there was something else, I'll have to check, but the lot worth more than the race entry fee.

No, it was a pleasure to have you as a running buddy. I hope you enjoyed the run as much as I had.
And it's a great confidence building exercise.
Thanks for introducing me to Leharna. She stopped me as I was about to leave and told me to go and get the goodies.

About sausage and beer - yes, I can't get it too. But then, joie de vivre is joie de vivre. Let's just admire it.

...and if you're a member of a club, the club pays your registration fee, so you race for free and still get the goodies! Although the 'goodies' for the duo teams was a t-shirt, not a bag of gourmand delights.

I did enjoy the race, thank you Alex. I wished I had pushed myself harder though as I was far from running a personal best and was disappointed with my performance.

Maybe we were chatting too much and not concentrating on the pace, ha-ha.
On the positive side - think how much you've improved.

Chatting is good... it stops me thinking about how I want to collapse in a heap! I think you are being kind when you say I have improved, but thank you!