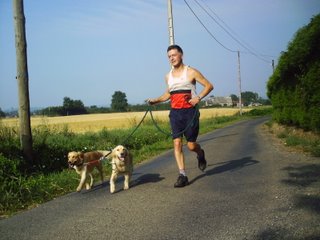 
Dogs are happy and excited and pull me along. We clock 4.10 min at the first kilometre. The pace is so fast I can hardly keep up with the two of them.
There is no difference between a lead and a leash. The words mean the same. I have hardly ever given it a thought, but somehow I like saying 'lead', not 'leash'. 'Lead' means showing the way, going together, forming a link, but 'leash' has a notion of restrain, suppression, not letting someone do something.
I think of my dogs as partners, and because sometimes I lead them, and sometimes they lead me, I'd rather talk about 'leads'.
I run my current two on a long lead which is really a horse lunge, 9 ft/280cm long, about an inch thick, made of four nylon strips pleated together, with two loops on each end. Our local Jardiland (garden centre) has a dogs' section next to a horses' section, so I had a look at the horse gear and found what I was looking for - a strong, long, comfortable lead.

At the dogs' end the loops hold a strong metal spring hook, a carabiner. And attached to it is a double (forked) lead that goes to dogs' collars. The double lead is about 2 ft long(wide) which gives the dogs enough room to change sides comfortably during the run, but when they are close to each other it wouldn't reach the ground. Strelka is a prefect steady trotter, but Nala often breaks from trot to gallop, so giving them room for maneuvre is important.
I've chosen the horse lunge because I find it easiest to adjust when running. On a quiet stretch I let it go full length giving the dogs room to go left and right, ahead or behind. As soon as it starts going low, I make a loop in one hand, and hold up the lunge in the other. If dogs yank at the lead I open one hand to free the lead, and let the loop slowly slide through the other hand. It slows down the dogs without choking them, but also allows me to keep my balance. When cars are coming I pull up the lead through one hand and make the loop bigger in the other.
If other dogs are trying to chase or attack us, the free end of the lunge instantly turns into a whip. I even managed to crack it once. And the thick nylon pleats make a good whishing sound. If the stray dog persists in following us, the free end of the lunge could be easily made into a third choke lead (it happened once or twice, and the dog was returned to the gratefull owner.)
I have been running with this lead for nearly ten months now. I tried ordinary dog leads, leather, chain and nylon, but dog leads tend to be flat with sharpish edges or seams which makes them less comfortable on the hands, than the rounded horse lunge. Having two leads instead of a double lead seems a very uncomfortable set-up to me, and may be dangerous on the road: dogs may pull you in different directions, or the leads would tangle up. And even with smaller and well trained dogs you get less control with two leads than with one. I've given up on retractable leads long time ago, because the retraction mechanism never works reliably, and fails you just when you need to pull dogs closer.
I have tried using harnesses, but the dogs didn't look very happy in them. They looked more like working dogs rather than running companions. Or perhaps it was my imagination. Anyway I didn't have a chance to try for long, because the harness, left unattended for a while, got chewed to pieces by the dogs. There is an argument in favour of using harnesses rather than collars for running: dogs pull with their strong chest and shoulder muscles and never choke themselves. I have recently discovered a dedicated team of fans of running with dogs who design and market gear just for this: running with dogs. Their web-site is at www.cani-cross.co.uk. They seem to be strongly in favour of harnesses rather than collars. They also organise and run Cani-Cross events in the UK for people who love running with dogs. And it seems to be growing into a sport of its own!
As I say: we are not alone. There is no difference between a lead and a leash. But having a lead feels more inspiring, I think, than being on a leash.
Posted by Alexander Anichkin

Keep on posting such stories. I love to read articles like this. By the way add more pics :)