Emma, Where Are You? 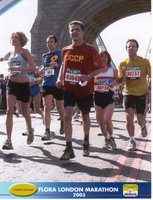 I miss Emma from my London Marathon, 2003. And I feel guilty about leaving her behind.

I normally run just on my own, with the dogs.

Which doesn't mean I don't like to have running buddies. Especially if they are nice looking women, and most women who run tend to be nice looking, whatever the age.

If you've never run a marathon you might think of it as a gruelling experience, when you can hardly think of anything, but getting to the end of it. Which is a sad untruth. A marathon takes three to five hours to run, for an amateur runner. And that's enough time to chat, make friends, fall out, have a fight, come back together again... Once you've settled in your run you can easily chat. While running I've made friends with whom I still stay in touch.

There is a certain steadiness in long-distance running which makes one instatntly trust another runner. I think no other sport, bar (Nordic) skiing can generate anything similar. Even when you are competing against one another.

In 2003 I ran my best London Marathon finishing in 3.36 hours. My family came to Mile 23 on the Embankment to watch me go past - but they were too late. It was my best marathon also because I had a wonderful buddy from mile 3 onwards, when the Red and the Blue start runners merge into one stretched out column. Emma was a Blue start runner, I was a Red, and I thought she were of superior strength, and about 20 years younger. We were running at roughly the same pace, but I could tell it was her first marathon. She had a beautiful confident stride, and a non-challant attitude to some other runners who were racing past us, pushing and shoving, and sometimes swearing for not letting them through. 'Some take it too serious,' she said to me. But I thought she was pushing herself just a bit too hard. A marathon is not your ordinary race, you can't just buzz through.

"most women who run
tend to be nice looking"

'Go, Emma, go', the crowds were shouting. 'You seem to be the most popular runner today' I said. 'Oh, it's just a very ordinary name' she said. We passed the Cutty Sark, and Mile 6, and 10k, and the Half Mark. 'It only starts biting after mile 15' I warned her. At mile 16, as we were crossing the Isle of Dogs and wriggling through the narrow lanes at the Canary Wharf, she said, 'I think I'm beginning to understand what you'd said.'

At mile 20, deep inside the East End of London, when the marathon goes through very narrow streets, there was a stand. A tall nice looking young man suddenly jumped up and started running alogside us, shouting: 'Go, Emma, go.' It was her boyfriend. After a few seconds he tripped on the curb and fell over. 'How embarrassing' she quipped as I passed her the Evian water bottle.

The cheering crowds grew thicker as the finish approached. But the strain on runners' legs also was getting unbearable. Every now and then I turned to Emma to encourage her, but I could see she was beginning to struggle. 'Just roll on' I heard myself saying to her, 'It's only five more miles to go'.

But at mile 21 she suddenly faded. I think it was that dreaded 'hitting the wall' thing that so many marathon runners experience. I nearly stopped, stretched my arm to her, and shouted, 'Just keep going.' And ran on.

My time at the finish was 3.36. My best. I sat down in the Mall, ripped off my Nikes, drank from my water bottle, looked at the medal and fished out a packet of John Players from my back-pack, and lit up. I was the happiest man in the world. Except that I wasn't. I left Emma, my beautiful running buddy, behind. I ran on, I didn't stop to help her.

I feel guilty even now, three years on. Even though I know I couldn't have helped her. I tried to find her. But her running number was obscured on the Action Photos (www.actionphotos.com) snap I got from the marathon. She wasn't on the list of official finishers, I did check all Emmas there. She must have dropped out. How horrible. I will never forgive myself.

I miss Emma from my London Marathon, 2003. And I feel guilty about leaving her behind.
Posted by Alexander Anichkin