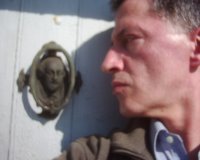 There is a blind bend as I go uphill from the bridge over the Vire river. Two cars with their fog lights on overtook me from behind just before the bend, and another, coming towards me came immediately after. The first two cars saw me and had swerved out to the left, and back in again. Had it been a split second later, there would would have been a head-on collision.

If I were running on the left side of the road I'd be hit by the oncoming car, or, if it veered out, it would have hit one of the two cars coming from behind.

Road safety is and should be a constant concern for anyone running on the road. What bothers me is the ambiguity of the current Highway Code. If you are on foot, which, presumably, applies to both walkers and runners, you should keep to the left (in right -hand side driving countries) or to the right (in left-hand side driving countries, which constitute the majority in the world), ostensibly to be made visible by the oncoming traffic and to see such oncoming traffic yourself. And, consequently, to make way for such oncoming traffic.

This, I think, is totally unacceptable and thoroughly wrong. Once you are on the road you become a participant in the road traffic. And, as such, I think, should automatically aquire the rights equal to all pariticipants in road traffic. British Highway Code says that more vulnerable road users, cyclists, bikers, people on horseback etc. should be given priority and right of way. In return, effort is expected on their part to make sure they are not holding up normal traffic.

On a small country road or lane I would interpret that as meaning that cars and lorries should slow down and make sure they can pass safely - for the walker or the runner, or the cyclist or the person on horseback.

The rule by which walkers (and runners?) are expected to keep to the side opposite to the normal side-passing of wheeled-vehicles, I think is out of date, and makes roads more, not less dangerous for walkers and runners alike. Not only it reduces the visibility, it also makes it more difficult for car drivers and other fast moving vehicles to pass them without increasing the risk of collision with on-coming cars. As in the real-life example from my morning run today.

I wonder if other runners have had similar thoughts and experiences and, if so, would like to hear their thoughts on the subject.

My dogs, of course, are trained to go off the road and on to the verge, and I myself always keep to the side or, on particularly narrow stretches, stop and let cars, lorries and tractors pass. And most drivers slow down, veer out and let me pass safely before proceeding.

The question of safety still remains, however.
Posted by Alexander Anichkin