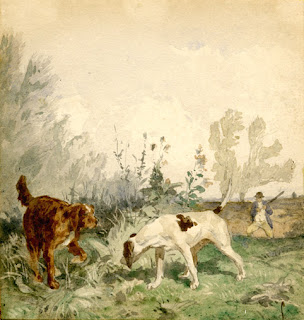 There was a big and jolly hunting party lining the road as we ran. I think they were after the sanglier – the wild boar. The hunters jokingly asked if we were out for the hunt too...

On the national scale,  la chasse is huge. France has the highest number of registered hunters in Europe – 1.343 million compared to,  for example, 800,000 in the UK. In Brittany and Normandy, 13-14 percent of the population over 16 hunts.  While it is difficult to calculate the overall economic impact of hunting, it is estimated that each hunter budgets €1,590 a year to support their passion (including licence fees, guns, dogs, equipment, petrol etc.) which, multiplied by the number of hunters is a staggering amount.

There are dozens of different types of hunting in France from the dressy Horse and Hound-type mounted hunts to exotic bow and arrow or even slingshot hunting. But most of us are probably more familiar with locals in camouflage gear (and yellow or orange vests, if it's a group hunt), a couple of dogs at their feet, who hunt on foot with shotguns.

They are mostly local people, from the village and a few from the nearby town, farmers, workers and artisans. This is typical of the average French hunt – they are mainly community groups, often with close ties to the land on which they hunt, rather than businesses that attract people from afar to come and shoot for pleasure. Indeed, according to a poll by the social studies institute CSA, well over 50 percent of hunters are workers and farmers, with a big proportion – 30 percent – being retired farmers.  The same survey says that the largest group, 32 percent, of French hunters only buy a local, departmental licence and never hunt further than 10 km from their homes, with another 10 percent buying national licence, but hunting only within a 25 km radius. In a multiple choice survey, hunters said that ‘involvement in the community’ was their main motivation for joining a club.