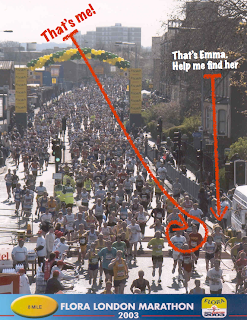 8 km - 1 hr 00.14 min - a blustery day. How is it that the wind is capable of blowing right in my face for almost the whole length of the course? Dogs got tired too.

BBC's Radio 4 ran a series of programmes about the first running of the London Marathon. Apparently the London police were initially reluctant to be responsible for policing such a huge event. The organisers took them to New York to talk to NY police. 'We have bad days and we have good days', the New York cops said. 'But the New York marathon day is our Happy Day - everbody's smiling and there is hardly any crime'. This impressed the London police. Not only have they helped the marathon, now there is always a group of policemen running with batons and wearing their famous bobby helmets.

Before the London Marathon, long-distance running in Britain was the exclusive domain of elite athletes, the BBC says. Two former British Olympic athletes Chris Brasher and John Disley were inspired by the New York Marathon, and the jogging boom of the 1970's, and decided to set about organizing a marathon through the streets of London. With almost seven thousand runners participating in the first race, marathon running was suddenly on the map.

Over 36,000 participants are confirmed for 2010. Today, the London Marathon is a distinct mixture of elite competition and street carnival, an event that the capital is exceedingly proud of. The great run this years takes place on 25 April. With just over two weeks to go some charities still have reserved places. Check here if you can squeeze in.

Suppose you took part in the London Marathon. You want to shout to the world 'Hey, I was there!' - and show it.  There is an easy way to make a card with an arrow or a call-out showing where exactly you are in a mass photo (read how here, on my other blog). And the photo here shows me passing the 8 mile marker in 2003.

Emma, to the left of me in the picture, was my accidental running buddy. We just happened to run at the same pace next to each other, started chatting, passing water bottles and sponges as we went. This went on okay for about 20 miles, but then at around mile 22 she suddenly ran out of steam and stopped. I tried to encourage her: 'Just keep moving, rest, stretch and walk - and you'll be there'. Then I ran on and finished in 3 hrs 36 min., but Emma - she wasn't on the list of finishers.

Even world class runners drop out of marathons - Paula Radcliff did, though not in 2003. She set the world record that year, which still holds: 2:15:2.

To this day I feel pangs of guilt for not staying with her.  If you know Emma or see her at this year's London Marathon, tell her I am sorry.