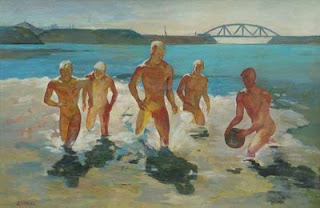 6 miles - 52.05 min - a bit windy, cool. Still, I could feel the blistering sun on my skin when clouds parted at times. I did put sun lotion on my nose and cheekbones, they are the first to catch sun, but it was more to protect against wind.
(Picture: Boys running out of water by Alexander Deyneka)

Yes, it is Summer and I strip layer after layer to stay cool. Runner's World has published an article 'Should I run naked?' by Amby Burfoot.

If you ask me, the ancient Olympians were a lot cleverer than we are, she says. They had the good sense to run, jump and throw in the nude. When you put anything between your skin and the environment, such as shorts and a singlet, you only decrease your body's cooling efficiency (even if you're more comfortable in certain areas). The so-called “modern” Olympians of 1896 were cleverer than us, too. They did their running, jumping and throwing in April. Some athletes complained about the chilly, damp weather, but Spiridon Louis gave thanks to Zeus all the way to his (clothed) marathon victory in 2:58:50.

The article is more about the hydration and heat challenges facing summer marathon runners, than nudity, but the idea is there. Some advice and caution from the article:

Too Much
Perhaps no runner has thought more about heat training and racing than Alberto Salazar. Before the 1984 Olympic Marathon he got tested in a heat chamber (where sweat production is measured) and learned to chug two litres of fluid before every workout. But then he crashed. He now believes he did too many hard 20-milers in the heat. "I was exhausted from the first step of the marathon," he says. He finished 15th in 2:14:19.

Everyone knows drinking fluids is supposed to help you run faster. But you have to slow down to grab your drinks. America's Steve Spence worked on this dilemma when he was training for the hot, humid World Championships Marathon in Tokyo in 1991. Spence set up a water table on his local track, and then practised drinking while running intervals at faster-than-marathon pace. "I figured if I got good at taking my drinks at this pace, it would come easy in the marathon," he says. Spence claimed the bronze medal.


And of course, Cool Clothing:

You already know that a white shirt will absorb less heat than a black one. <...> In 2000, Nike produced a shirt that several runners wore in the Sydney Olympics. This white shirt sat off the skin on small bumps (allowing air to circulate), was constructed of a large fishnet weave (more air circulation), didn't absorb sweat (leaving it on the skin to cool you via evaporation), and was made of recycled plastic bottles. Too bad Nike called the shirt the Stand-Off Distance Singlet (because of the way it stood off your skin), which sounded too much like a shirt with a body-odour problem. They then went on to produce something called the Nike Sphere Cool Marathon Singlet, with aerodynamic seam placement, mesh construction, and 'Zoned Venting' technology. But give me a Stand-Off Distance Singlet, and I'll show you a really great hot-weather running shirt.

And now we're coming back to what was promised in the title:

Here's my advice <...>: cut your racing singlet as short as you can. Research by exercise physiologist Timothy Gavin has shown that 'the chimney effect' can improve body cooling. This refers to air moving up the bottom of your untucked shirt and out the top.

Or just run naked. You'll be reconnecting with your Olympic forebears, increasing your chances of a medal, and giving a big boost to the BBC's TV ratings.

It looks like Nike got wind of the advice. Here's their video on naked running: