A Puppy for Obama? 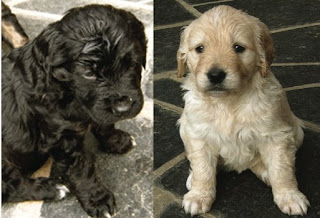 I heard on the radio that Barack Obama had promised a puppy to
his daughters.

We are giving away 6 adorable puppies - three black and three white. Four are already reserved and two, one black, one golden are still availbale.

Barack Obama and his family are looking for a puppy which he promised to his daughters. That's one pre-election promise, he said, which is definitely going to be kept. Reportedly, the Obamas are looking for a rescue dog, a cross-breed, possibly a Golden and a Poodle - a goldendoodle.

I think he should look at ours, because they are not just adorable, but qualify as rescue dogs, crosses of two of the most companionable and easy to train breeds - and there is rich international symbolism.

The puppies were born on 9/11 this year. The mother is a Golden Retriever with floppy ears and beautiful light stride when running. The father is a three-colour English
Setter, abandoned by his owner and rescued by us, a British-Russian family, living in France.

Mr President, if this blog gets to you, you and your family are welcome to adopt our puppy.
Posted by Alexander Anichkin

A change from the ordinary plus an international history--very cool reasons why Obama's family would be blessed to adopt your adorable pups for their family addition!
I just wanted to greet you and say thanks for acknowledging my own bleak blog (unlike yours) :).
I enjoy running as well--though no longer have a canine running pal. (my mini. daschund is not up to the task)
Glad you're out and about again - keep it up!