When children join in: the tale of a spare knee 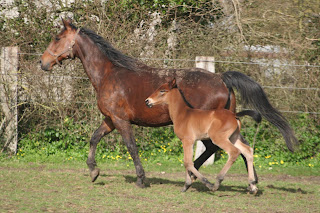 My daughter, 14, has asked if she could join me for a run today. She is fit, but not in a runner's sort of way: she has a brown belt in judo and enjoys her weekly sessions at the club.

But when we go on the road she is struggling even before we reach the first kilometre mark. I slow down to a jog and tell her stories of marathoners who had pulled through no matter how hard it was. I explain how to develop a light springy stride by imitating a dog or a horse trot - and why four-legged 'people' (I call all living creatures 'people') have a spare 'knee' pointing backwards, while humans only have one knee pointing forwards. I tell her a Kirghiz folk-tale my grandmother used to read to me when I was a little boy.

Father set on a journey along the Great Silk Road with his son. 'Can we make this road shorter' the father asked. The son jumped off the horse and started digging to build a new road. Father watched him for a while and then said: 'Son, it's not the road that makes a journey shorter, it's having someone to talk to while you travel.'

The dogs are pulling - they don't understand why we are so slow and, when, after just reaching the village two kilometres from our farmhouse we go back, they refuse to turn around and look at us in a pitifully disappointed sort of way.

I feel for the dogs, but making time for my daughter is more important. I have three children and I know that spending some time with just one of them is not the same as being together as a family. As we run we chat non-stop like we'd never do when we are all together and she tells me things she wouldn't when her mother and brother are around.

We both enjoy it. And, I think, because when running you spend much more energy than, for example, when just going for a walk - the enjoyment is greater.