Men's Only: on Headaches, Thorns and Bitchiness 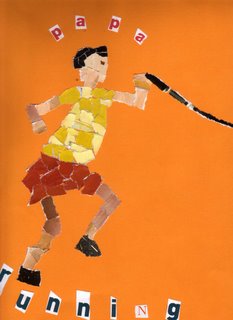 
Nala, the female retriever has a bad paw today. I check her paws, can't see anything, but, I tell myself, perhaps she caught a thorn, or cut herself on a leaf of grass, or pricked her paw on sharp gravel.

Whenever I look at her she starts limping and looks at me miserably. But, when she thinks I am not looking she bounces around the garden, chases the cats and rushes to the gates to bark at passersby.

I try to drag her out on the road for a run, but her limp suddenly becomes so bad that I give up and let her stay at home.

Which is just as well, I don't much like it when she stalls as we approach the 'bad house', with nasty big dogs barking, or suddenly pulls across the road in front of the oncoming cars, just to chase a squirrel or a cat. Or when she starts pulling me along to run up a pony, or a calf, grazing in a field we are passing. All this erratic behaviour, 'feminine', I call it, just to myself, breaks up the steady pleasant pace or my normal run, and gives it instead a jerky, nervy rhythm.

"wouldn't runs be too predictable without the female touch?"

So, it's boys only today: Strelka, the male twin retriever, who was eleventh in a litter of twelve (the 12th was Nala), and I, who was the first in a litter of one. I think I go fast and steady as I pass the 1 km mark below 5 minutes instead of the usual 5.15-5.25. We pass the first 'bad house' at mile 1 at a steady pace as Strelka ingores the desperate barks of an Ayrdale terrier and two black Newfoundlands. We pass the 'meek house' with the little black mongrel dashing up and down the fence, and Strelka ignores him. We run past the Foxterrier house, trot in front of the German Shepherd gates, stomp by the English Setter walled garden, and at the Cocker Spaniel garden the silly spotted thing with bulging reddish eyes chases us up all along the inside of his fence until he smashes himself again, for the umpteenth time, into the gatepost.

Strelka ignores them all. What a bliss, I say to myself, a steady, serious, unperturbed 'manly' run. We pant, we sweat, we work hard, and I expect a good fast time for today's run...

And then I suddenly realise that I miss Nala's dashes, jerks, pulls and stalls.

I know a lot of men who only see women's 'headaches' and 'bad days' as an excuse for not doing what is expected of them, or, some even say, as 'power tools' to control their males. It's not politically correct even to think like that anymore, but, in 'men's only' world, the attitude still lingers on... I absolutely hate it in men when they think of women as a kind of subspecies.

We finish the run at the gates of my house, I press the stopwatch button, and look up - Nala is running towards us happily with her limp not noticeable. She sniffs at us, and wags her tail while Strelka goes to lie down on the slates of the patio to cool down. I pour out some milk for both dogs, the male Strelka and the female Nala, breaking my own rule that only the dog who did go for the run gets the reward.

And, as I do my cool-down stretches and watch the dogs lapping up their treat, I think: isn't it that bit of bitchiness in Nala that makes our runs more enjoyable, gives them diversity and vibrancy? Wouldn't they be just a tiny bit too steady and too predictable if they always were, well, 'men's only'?

I finish stretching and remember that I'd forgotten to check the time. I look at the watch - and I can't believe my eyes: we were almost a minute slower today than yesterday when Nala was annoying me with her dragging and pulling tricks...
Posted by Alexander Anichkin