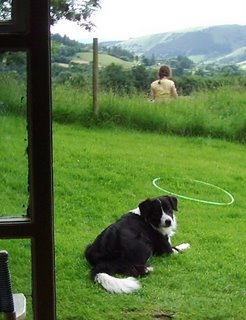 ...Another very fast run with my friend Simon from England (his web site is here: www.gallerydelagrange.com). Instead of my usual 5.15 minutes per km I had to go at 4.30-4.45. I thought I'd collapse...

But, as it goes, long distance running evens out the most different of characters. After mile 3 I got used to the faster pace, and, still panting, could hold a conversation ranging from Renaissance Art to dealing with defiant children.


Simon likes to run on soft surfaces, grass, verges or bare ground. I like or run on hard roads. He says his feet feel better on soft surfaces. I say, on a hard, even surface I can take my eyes off watching what's ahead and let my mind rest and drift to wherever it would go. Which is one of the greatest pleasures of running.

Normally I keep to the tarmac and let the dogs go off to the grassy verge. But today dogs compete with my friend for the soft surface. Last time we ran together he got tripped by them and fell over. Today I know the danger and try and keep them away from Simon.

And I also suddenly understand why my dogs tend to get off the road and try to stay on soft grassy verges - to cool their pawpads...

Zoe, my old Border Collie runnning buddy (in the photo), used to look out for puddles and streams, and would veer off course and plonk herself into water whenever she could. She used to do that every time we went on a run through the hills of Wales, and followed the same routine here in Normandy. My current two, a pair of Golden Retriever twins, are not as sophisticated yet, but they have already developed a technique of their own - keeping to soft dewy grass on the verge of the road.

On the internet forums you can get a lot of advice about sore dog paw pads when running. Some even suggest putting special shoes on them. My experience tells me: trust your dogs to look after themselves and learn themselves. Even if it's the hard way. I started running with Zoe, the Border Collie, when she was four. After the first 6 mile run she walked around the cottage as though she were on wooden clops. My wife checked her grazed paws and bandaged them, repeating sorrowfully "poor-poor Zoe" and looking furiously at me. The second time we went on the road with Zoe there was no problem, she knew what to do to keep her paws safe.

Even after millenia of being domesticated, dogs have retained the natural ability to find solutions to their problems.

We, humans, may have larger brains than our four-legged friends, but too often, too quick we get desperate or hysterical and go to support groups, therapists and doctors instead of just watching what natural solutions the things and creatures around us have to offer. And they do offer a lot.