How to Run a Marathon 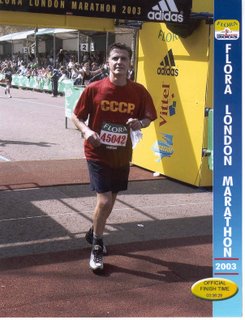 Cold, but, when you run, the only bit that really gets cold is your hands. So, I put on my asics running gloves, a birthday present from children.

The air is so heavy, it is as though the drizzle just hangs in weightlessness. Can't run fast in these conditions, but it feels nice on skin. Dogs quickly get their coats wet, it looks like it's good for them too - they don't even seem to pant.


But the French are grumbling, 'oh-la-la, English weather!'

I tend to think of it as Welsh, which takes me back to the country where I had lived for five years, loved it and was happpy there.

And where I rediscovered the pleasure of running.

Here is a runner's diary which was published in the Times (of London), 11 April 2002. It is too heavy on difficulties, but that's how the media treat running - and unfairly so!

The photo is from the London Marathon 2003, published with permission from Action Photo (www.actionphoto.net)

December, 2001: Announce I will run the London Marathon. My wife raises an eyebrow. She is about to point out that she has never seen me in running shoes. But I do have a cup from the Tokyo Foreign Correspondents' Association half marathon that I won in 1985. She puts down her book and says I'll get no support from her until I give up smoking. She also asks if there are paramedics along the course. Is this her way of saying that she cares?

December 15: Step up circuit training to twice a week and start gentle early morning runs through our local forest in the foothills of Snowdonia. It would be a stunning place to train if you could see anything through the rain. My wife asks why am I wearing a nicotine patch and smoking at the same time.

December 20: See my GP about aching knee which, along with the dog-fouled pavements of Moscow, had been my excuse for not running. He insists it is not arthritic and I can continue. I am nearly 45. Despite being slim, have high cholesterol. Since cutting out dairy products it has dropped significantly. GP points out it would go even lower if I stopped smoking. When I met my wife, I drank like a Russian and was faithful to the Russian habit of eating nothing but deep fried food. I gave up alcohol three years ago and eat fried food only when she is not at home. But I still smoke too much.

Boxing Day 2001: So satisfying to run in front of a timber lorry carrying a hundred tons of freshly cut logs as it waits for you and your dog to turn into a side lane. When a woman from Marie Curie Cancer Care called on Christmas Eve to tell me it has a marathon place and was I still interested, I was on top of the world. I have dreamt of running this most famous of endurance races since I first read about the Athenian soldier's famous feat in Ancient Greece. But some days the cold makes my joints feel like they are made of barbed wire.

January 7: Russian Orthodox Christmas. Cold and frosty and pitch dark as I put on my thermals, and a miners' lamp on my head. I know I look ridiculous, but at this time of the morning sheep are the only witnesses.

January 18: My 45th birthday. Son gives me a stopwatch, my daughter a pair of running shorts and my wife a heart-rate monitor. Have increased my daily morning run to six miles and now do the distance easily, even when searing gales and horizontal hail slow me down. Jon Roberts advises alternating long, slow runs with short fast ones. Some days can't even take the car out as it hurts my feet too much to push the accelerator.

February 14: In the Canaries for a winter break. "Run on sand. It's different," a veteran runner suggested. So run through the naked sun worshippers on the Maspalomas dunes. Yes, running on sand is different. It is agony, and the sun turns sweat, or is it tears, into salty crust. In Wales the rain washes it away.

February 20: Had given self a birthday pair of Nike Tailwinders. Wife thought them pure affectation, but no more knee problems since started wearing decent shoes. Wife asks if there is any point feeding me steak and healthy carbohydrates such as buckwheat and couscous if she then catches me snacking on crisps and chocolate.

March 1: St.David's Day. Pin a daffodil on my jacket and prepare the sponsorship forms. I have to raise £2,002 for Marie Curie. Advantage of living in a small community is that everyone knows who you are - especially if you are a Russian in Wales and you wear a bright red hammer and sickle T-shirt with a Welsh dragon sewn on to it.

March 21: Round Lake Bala 12-mile fun run tomorrow. With a couple of weeks to go, now time to look to pre-run diet. This means uppping not just quantity but quality of carbohydrates, drinking gallons of water and cutting out all dehydrating drinks such as coffee, tea and fuzzy drinks.

Easter Sunday: In France. Run for three hours at a steady 8 minutes per mile. After a couple of hours our hosts and my family so worried they come looking for me in the car. Wonder if the fabulous patisserie chocolate concoctions count as healthy carbohydrates. Hosts also horrified (so am I) that still smoking.

To sponsor Alexander Anichkin: www.justgiving.com/anichkin
(My page isn't there now, but if you are raising money for charity, that web-site is a very useful tool - it allows you to build your own sponsorship web-page in a minute, so that your your friends and supporters from all over the world can pay over a secure internet connection straight to the charity of your choice while the web-site keeps the tabs for you.)
Posted by Alexander Anichkin