9.6 km - 57.16 min. It's 16ºC (60ºF) and climbing, almost beach weather and so quiet. Wonderful to feel real sweat drops dripping all over at last.
I really felt superior to my dogs today. As a two-legged creature, I run upright. Thus my line of vision is about 4 feet (120cm) higher than that of my four-legged companions. So, before the dogs could see or even smell him, I was the first to see a stoat running across the humping road. He had the trademark black tip on the tail and a mouse in his mouth. Lovely light-brown back and white belly.

He dashed into the hedge and hid among the mighty beech-tree roots. I stopped holding the dogs to stop them giving chase and looked. Seconds later the stoat looked out – shiny black eyes, round ears and white neck.

In areas where snow lies in winter for at least a month stoats change their coat to pristine white with only the black tips on the tail unchanged. White winter stoat pelts are known as ermine and have been used for trimming ceremonial garments of royalty, peers, judges and Oxford and Cambridge dons. These days it's often replaced with rabbit fur or fake fur with black streaks painted on it.

The stoat should, in fact, be used as a mascot for runners and triathlonists. He is a super-runner and a natural at triathlon. With a body of just 180-320mm (7.4-13in) and a weight of under 200g (less than a quarter of a pound), on a daily hunt he runs up to 15km. On snow they move in jumps of about 50cm - the length of my stride is only about twice longer.

Here is the portrait of Queen Elizabeth I with an ermine in her lap. 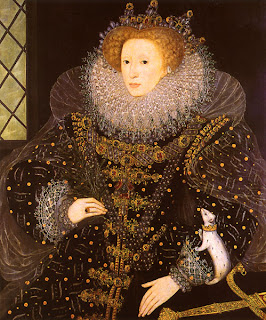