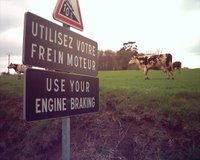 It happened again today - I just avoided a road accident.

In winter, on weekdays I run my 6 miler at lunchtime. Those who know France will understand: it is the quitest time of day when the whole of the nation stops for the midday meal. In fact, about 75 percent of the French go home to have a family lunch.

I was busy finishing urgent work in the morning and was a bit late to get out for a run. And there were lots of cars weezing by. I run on the right, cars pass me on the left. Which is okay when they can see the road ahead.

And it was just that: a car sped up behind me and was about to pull out to the left and speed up to overtake me. At that moment an oncoming car appeared, also speeding up as it is just where the go slow area finishes on the edge of the village. Neither of the drivers could see each other, I could see both. I waved to the car coming up from behind me to slow down and not pull out to the left to overtake me. Luckily the driver understood my signalling, slowed down and stayed behind me until the oncoming car had passed and we had a clear view of the road ahead. He smiled and waved at me thankfully as he overtook and sped off.

Had I been running on the LEFT of the road, as many runners do, following the Highway Code advice for safe walking on the road, with the blind spot behind me, and had the oncoming car veered out to go round me I would not have the chance to warn cars coming up the bend and there would have been a head-on collision.

I've written here once that, from my experience of running on the road, it is much safer, for both runners and cars, if runners (and possibly walkers) stay on the right (left for the UK, Australia, Japan and other countries with left side traffic.) Today's run confirms my belief.

Of course, the general rule on the road is caution, but there will always be someone to careless or too impatient.
Posted by Alexander Anichkin