Whose Run Is It Anyway? 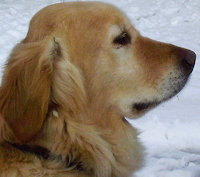 Strelka the Golden reflects on his masters running habits in Summer

These days the boss gets angry with me when I stop for a sniff or a pee.  I don't like him getting angry with me for anything and most of the time I run by his heel all the circuit, sometimes ahead, sometimes behind and most often by the side. It's good to go out and check what the others are up to.

And he is a great hunter too, the Boss. Think, bringing all those huge bags of dog biscuits every week from the hunt! Just for us! And yesterday he was especially lucky, he brought back a bagfull of fat bloody bits of pork - all for us. Don't know why he called them 'scraps for dogs', they were delicious!

Anyway, for some reason he insists on running on and on without stopping, even now when it's really getting too hot for a fast run. Yeah, okay, to be honest I sometimes pretend I want a pee when, in fact, I just want some time and space to enjoy the outing just for myself. Leroy the Setter is not like me, he would run on and on, but I know he would like it too.

I mean, I am okay with warm weather, I just pant more, and then, at the end of it, there is always a nice cool room with flagstones.  But I can't take off my coat like the Boss does. And honestly, whose run is it anyway? What does he think, it's all just for him?

I can keep up pace with him, or catch up if left on my own, no problem.  But give me some freedom, sometimes at least. I don't want too much of it, I'll catch up and generally I'm happy just lying on the mat or sitting by the house.
Posted by Alexander Anichkin