Cabernet for a beautiful runner 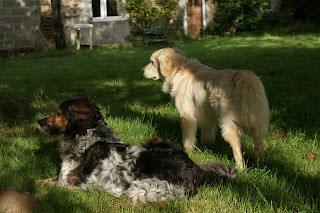 53.45 min - 6 miles - Wonderful sunny September day. Light pleasant breeze from the East, still very warm and I try not to push the dogs too hard.

Even though they get hotter than I do, I envy them - they get all the smiles from passersby,  especially from young blond women, why, I honestly don't know.  The smiles are definitely for the dogs, not for me. Only occasionally I  get smiles from shaggy old farmers trundling in their tractors.

Well, I suppose smiling at dogs rubs off on me, a bit.

Sometimes cyclists pass us. On weekends we see runners and walkers too, a few women among them.

What is it that makes women runners so attractive? Can it be just the act of running? I've yet to see a woman who runs regularly, but is unattractive. I know, I am a runner and, ergo, attracted to other runners, ergo, to women who run, ergo, er-r, especially if they run with dogs...

But the magic works on men who don't run, too. Elise Blackwell, a fellow writer from South Carolina, tells me she was given a bottle of fine Cabernet by a neighbour as she ran past, with her dog. The neighbour, a 'wine evangelist', had just received a delivery of wine, a crate, and was sitting on the porch admiring the world and all the beautiful things in it, apparently. And it so happened that a beautiful woman ran into that picture. If I were on that porch I'd definitely do the same.

Except, isn't it a weird sight: runner with a bottle of wine in hand?

Here's to running, Cabernet and women who run.

P.S. There are lots of gadgets for runners. But not one among them to help carry bottles of wine. Does anyone have any ideas?

Email ThisBlogThis!Share to TwitterShare to FacebookShare to Pinterest
Labels: canicross, how to enjoy running, runner's gear, women and running

ah at last, I could find this post once again. You have few [url=http://tipswift.com]useful tips[/url] for my school project. Now, I won't forget to bookmark it. :)

thanks, best wishes for the project.