Get fit to survive the economis crisis 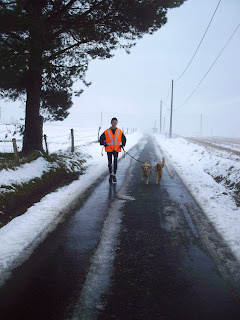 Strange. Same strong North-West is still blowing, but feels pleasant. And somehow the run was easy and my feet felt light.

Below is the Editor's Blog by Miranda Ingram from the March issue of the Rendezvous, an English language magazine published in Normandy, France. As a rule I only publish my own original content, but since I have become a character in Miranda's article, I decided to make an exception to the rule.

ever noticed how men swim the same way they drive -
over-taking, cutting in, then
holding everybody up

It’s that time of year when a glimpse of daffodil cheers the heart and hints that maybe - who knows? - the sun will put in an appearance this summer.

It also reminds us, however, that lardy winter bodies will soon be unwrapped and put on show.
Making a stab at getting in shape makes sense and it’s not just about how you look, or the fact that looking better makes you feel better.

This year, more than ever, we need to be physically and mentally robust.

There may be little we can do about the global economic crisis. What we can do is look after ourselves well enough to be able to cope with its effects on us and those close to us. Being in poor physical shape leaves you more prone to despair.

So, time to peel away from the wood burner and sniff the air outside. I can preach! Some, of course, are irrepressibly active and naturally subject their woes to a punishing physical regime. Others among us are more inclined to escape via a glass of wine and a good book, curled up on the sofa. The invention of cars, we feel, surely made legs redundant.

Can those of a more static disposition morph into active types? Apparently so. You only have to do something new - drink tea without sugar, go for a walk, for example, - 13 times or for 2 weeks for it to become a new habit.

Take my husband. One day he hit forty, drained a last bottle of vodka, stubbed out his cigarette and announced he was going to run the London Marathon. He took to crawling out of bed in the dark, donning a miner’s lamp and dragging the dog out of her basket for a morning run.

The following April he fulfilled a life long dream when he crossed the finish line on the Mall.
He has run it again several times since and yes, running is a new addiction. He gets twitchy if more than a day passes without the mental release of a 10 km run.

Me, I prefer swimming. When I say swimming, I mean actually swimming, not the palaver of going swimming.

Not the business of getting undressed in a tiny cabin, balling up your clothes and then finding that you have crammed them into the one locker where your token doesn’t fit or the lock is bust.

Not the dash through the freezing foot-bath nor the eyes of the life-guards summing up your excess pounds; not the knee in the stomach as you try and pass someone in a swimming lane laid out for stick insects.

Ever noticed how men like to swim the same way they drive? Compulsively over-taking, cutting into the gap in front then holding everybody up.

When lanes are organised from fast to slow, men will always pick the fast lane even if they can barely muster a sluggish breast stroke while women, even aspiring Adlingtons, opt for the slow or middle lanes. 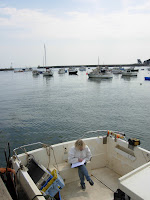 You see these men on the pool side, limbering up and gulping energy drinks. Natty little swimming trunks, bodies waxed and tanned, go-faster goggles: you just know they’re going to throw those testosterones into the Man-Butterfly - the one-man wave-machine.

So you let them go first, then they run out of stamina half way down the first length and you have to stop dead to avoid a kick in the face.

(OK, OK, don’t all write in. Women can be just as annoying. I mean, if you want a gossip, why not meet for a coffee and a fag rather than catch up in the shallow end?)

But, if you treat yourself to a jacuzzi afterwards, (the whole point of going swimming, surely?) there’s Mr Man-Butterfly again, draped across the tub so you have to sit sideways with your knees bent. Either that or he’s in the sauna cranking it up to extra hot.

Then at the end of it all, there’s the timed shower which peters out just when your eyes are screwed closed and full of shampoo, trying to put socks on when the floor’s sopping wet and finally emerging into winter with wet hair.

So when I say I like swimming, what I really mean is that I would swim at least daily, possibly more, if I had a private heated indoor pool of my own. Sadly, it is a renovation project which will have to wait.

There’s always a good excuse to put off a new exercise regime. Banish it - and get moving!

************
Once again, we have been rewarded for being too lazy to pick up the last of our apples in autumn. On cold days, the garden is a sea of birds come to feast on the rotting fruit. And there’s more than enough to go round so they don’t even have to fight over it.

Meanwhile, the red squirrel makes a daily visit to add another walnut to her collection.

Email ThisBlogThis!Share to TwitterShare to FacebookShare to Pinterest
Labels: cani-cross, getting fit for Summer, how to run a marathon, Miranda Ingram, running with dogs, the London Marathon