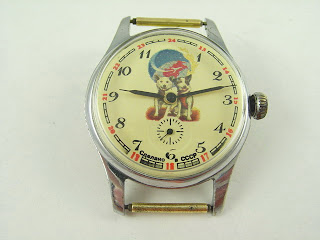 A friend of mine sent this picture of a Russian 'commander's' watch with a picture of two space dogs on the face. He was asking if I'd recognise them.

As a matter of fact I DO remember both dogs. The first one in space, Layka, could not be returned to Earth and 'sacrificed herself on the altar of space exploration'. But these two, Belka (Squirrel) and Strelka (Little Arrow) were sent up to test if a human pilot could be safely sent up and returned back. The dog mission was successful and both huskies safely parachuted in the Steppes of Kazakhstan just a few months before Yuri Gagarin did his historic space orbit on 12 April 1961.

Belka and Strelka were accorded a huge run in the Moscow Zoo with plywood rockets for kennels and stars and moon to jump over - all to themselves. I remember my grandfather taking me there to see them. They were indistinguishable from most other dogs, but the excitement of seeing the real space dogs was tremendous.

Americans, by the way, sent up a chimpanzee to test-fly their system, which, bizarely, upset the white astronauts. 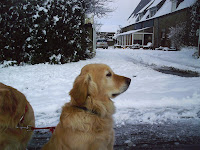 When we got our two Golden Retrievers I suggested naming them after the two Russian space huskies. Strelka stayed, because my son seconded the motion, but Belka was overruled by my daugh

ter. So, we have Strelka (in the photo) and Nala (the naughty lion princess from Disney's Lion King).
Posted by Alexander Anichkin